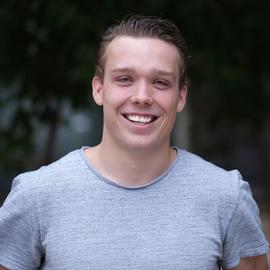 Travis is a PhD candidate at the Institute of Biomedical Engineering at the University of Toronto. His research interests include DNA nanotechnology, RNA therapeutics, molecular biology, and physiology.

Prior to becoming a member of Dr. Chou’s lab at BME, Travis completed his undergraduate degree in Biology with a concentration in Health Sciences at Carleton University. He completed his undergraduate thesis under Dr. Adrian Chan and Dr. Iain McKinnell under an NSERC Engage Research Assistantship. Here he developed an algorithm that automatically detects poling strokes and turns from Inertial Measurement Unit (IMU) data collected in the sport of Para Ice Hockey. During his time at Carleton, Travis was also a varsity athlete for the Ravens Men’s Hockey team, where he earned an OUA Bronze Medal and the George Hunter Academic Award.

During life outside the nucleus, Travis loves playing and watching sports, being a foodie, binge watching Netflix with ‘Sensations – Vanilla Chocolate Temptation ice cream’, and contemplating the theory of time relativity.